On our recent safari, deep in the heart of the vast wilderness that surrounds Tasimba’s home camp Linkwasha, we met up with Bhubezi, a legendary lion in the area.  But this was not the Bhubezi who had dominated this area for years and whose life had intersected with another legendary male, Cecil. The Bhubezi we met was thin, he moved listlessly, and his eyes were no longer the clear amber pools of his younger self.

Now 11 years old, it was sad for us to see the waning years of a pride male who had made this his domain. It was especially poignant for us because Bhubezi has been central to the story of lions in the Wilderness Safaris concessions ever since we chose this area for our Tasimba experience in 2015.

Bubhezi and his brother Bush had taken over two separate prides in the area, first Jericho’s and then Cecil’s. Jericho and Cecil then famously formed a coalition to take over another pride several miles north. In May 2015, Bush was lured out of the park and “legally” shot, leaving Bubhezi without his brother to help hold the pride together. Two months later, Cecil was also lured out of the safety of the National Park and was notoriously shot by the Minnesota dentist.

Tasimba’s involvement with Linkwasha began in the shadow of Cecil’s death, while Bhubezi still controlled Cecil’s old pride. But things can change quite swiftly in the wild. One afternoon, on our first safari in March 2016, we sat for an hour a few feet away from a beautiful male lion who was resting beside the jeep track. This was Xanda, Cecil’s son, who with his brother had now usurped the Linkwasha pride from Bhubezi. 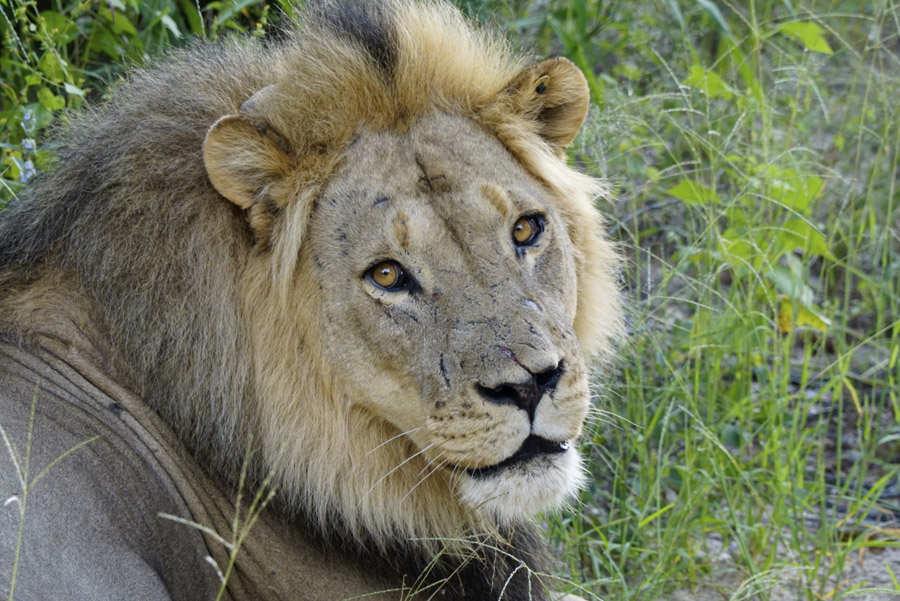 Bhubezi moved away from the immediate area, but over time managed to coexist with Cecil’s pride, although he no longer had a pride of his own.  In 2017, Xanda too was killed by hunters after being lured out of the park.  Bhubezi, now over 10 years old, was unable to recover the pride which then fragmented under two young nomadic males.

And so, as we sat in our vehicles and watched Bhubezi that afternoon, we knew we were witnessing the twilight of a magnificent animal in the inevitable course of nature. The lions of the Wilderness concessions, Cecil, Jericho, Bhubezi, Bush and Xanda, are the stuff of legend. They have passed the torch to new males; nature will make sure of that.

Bubhezi hasn’t been seen since that afternoon but his name and his bloodline will live on.

To read “The Life of Bhubezi the Lion” by Brent Stapelkamp, click here.

Contact us about our next safari. We’d love to have you join us!
(Corporate and group rate packages also available).